Cozy Mysteries with a Christmas Theme 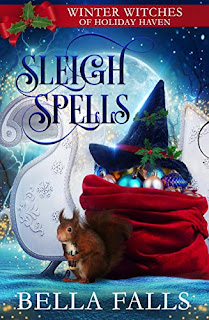 This is billed as a Christmas paranormal mystery.

Aurora Hart hates everything Christmas, but how could she turn down the opportunity to serve one year of probation in Holiday Haven versus a full sentence for her crimes? Saddled with a talking squirrel roommate, Aurora is doing her best to keep a low profile as she bides her time. Everything is going fine…until Santa’s sleigh gets stolen.

Now, all eyes are on her and the other town Humbugs, and it’s up to Aurora to keep her behind from ending up back in jail. With the help of a very important person from the North Pole, she finds herself hot on the trail of the real culprit. But it will take her having to do something she’s never done before—accepting new friends and their assistance. Only then will Aurora be able to turn not only her own life around but also Christmas for the entire world!

Will Aurora be able to solve the mystery of who stole Santa’s sleigh in time? Or will the culprit get the final sleigh?

Christmas Calamity at the Vicarage by Emily Organ 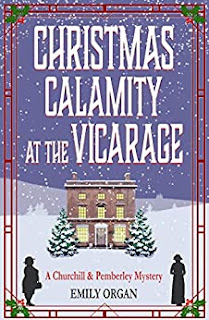 This is a Christmas novella in the Churchill and Pemberley Cozy Mystery Series.

The Vicarage Christmas Party has gone horribly wrong. The mince pies have been finished off. And so has the village choirmaster.

Senior sleuths Churchill and Pemberley are enjoying sherry and festive cheer at Compton Poppleford's big event of the season, but their fun is ruined when the choirmaster is found dead in the parlour. Which of the vicar's guests could possibly commit murder at Christmas time?

With everyone detained at the vicarage, Churchill and Pemberley find themselves in all the wrong places at all the wrong times. Their wayward, four-legged assistant isn't helping matters either. Inspector Mappin is certain they're his suspects and the vicar is convinced too. How can the two old ladies prove their innocence? With the net closing in, the detective duo must find the culprit to avoid spending Christmas in Compton Poppleford's police cells.

Christmas Calamity at the Vicarage is a novella for fans of light-hearted mysteries and sharp-witted elderly sleuths. 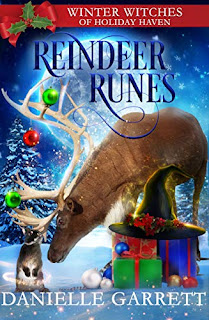 This is Book 2 in the Winter Witches of Holiday Haven Series, and it's a paranormal cozy.

When Rudolph vanishes the week before Christmas, Lumi is thrust from the peace and quiet of her family’s farm, into the magical town of Holiday Haven to help find him.

Lumi quickly discovers that Rudolph isn’t the only local celebrity who’s gone missing. Jack Frost is also MIA, just days before his coronation as the next Frost King.

Teaming up with Corbin Frost, Jack’s reclusive brother, Lumi finds more questions than answers. What she thinks is an odd coincidence quickly turns into something more sinister.

With time running out for Rudolph and Jack, can Lumi use her powers to save the North Pole? 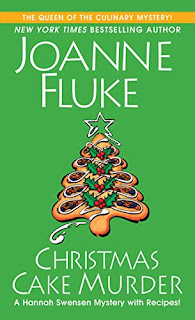 This is Book 23 in the long-running Hannah Swensen Mystery Series, and it's a prequel to the series.

It’s Christmas many years ago, and topping young Hannah Swensen’s wish list is becoming the go-to baker in Lake Eden, Minnesota. But as Hannah finds out, revisiting holiday memories can be murder…

With her dream of opening The Cookie Jar taking shape, Hannah’s life matches the hectic December hustle and bustle in Lake Eden—especially when she agrees to help recreate a spectacular Christmas Ball from the past in honor of Essie Granger, an elderly local in hospice care. But instead of poring over decadent dessert recipes for the merry festivities, she instantly becomes enthralled by Essie’s old notebooks—and the tale of a woman escaping danger on the streets of New York.

Hannah’s surprised by Essie’s secret talent for penning crime fiction. She’s even more surprised when the story turns real. As Hannah prepares to run a bakery and move out of her mother’s house, it’ll be a true miracle if she can prevent another Yuletide disaster by solving a mystery as dense as a Christmas fruitcake . . . 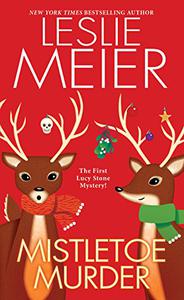 This is Book 1 in the long-running Lucy Stone series (there are 26 books in the series!).

As if baking holiday cookies, knitting a sweater for her husband’s gift, and making her daughter’s angel costume for the church pageant weren’t enough things for Lucy Stone’s busy Christmas schedule, she’s also working nights at the famous mail-order company Country Cousins. But when she discovers Sam Miller, its very wealthy founder, dead in his car from an apparent suicide, the sleuth in her knows something just doesn’t smell right.

Taking time out from her hectic holiday life to find out what really happened, her investigation leads to a backlog of secrets as long as Santa’s Christmas Eve route. Lucy is convinced that someone murdered Sam Miller. But who and why? With each harrowing twist she uncovers in this bizarre case, another shocking revelation is exposed. Now, as Christmas draws near and Lucy gets dangerously closer to the truth, she’s about to receive a present from Santa she didn’t ask for--a killer who won’t be satisfied until everyone on his shopping list is dead, including Lucy herself.
Find Mistletoe Murder at Your Favorite Retailer 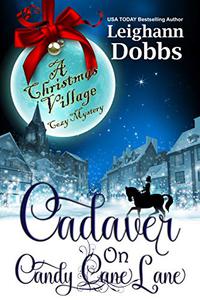 This cozy mystery is a short novella-length book.

When Ember Quinn visits Christmas Village to assist her elderly great-aunt Phoebe in the holiday chocolate-making tasks, the last thing she expects is for an elf to get murdered at their back door.

She soon discovers that toy-making elf, Alfie Svenson, was up to no good. Not only that, but he had a mysterious accomplice. Too bad Ember suspects that accomplice might be Phoebe.

With the reluctant help of Brimstone the snarky cat, Ember must dodge lying elves, creepy snowmen, unfriendly reindeer, an angry toy factory manager, and a sleigh-transportation boss who might be involved in organized crime in order to find the real killer.

Yule Be Sorry by by Kim M. Watt 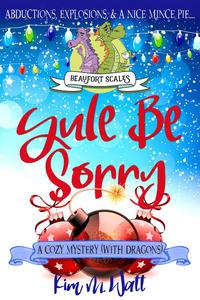 This cozy is billed as "a funny cozy mystery with dragons."

A festive tale of kidnapping, explosions, & stolen turkeys....
One should never meddle in the affairs of dragons, but someone has been doing just that. They’ve been making imitation dragon scale baubles that are nothing short of lethal, and kidnapping delivery drivers all over the Yorkshire Dales. They’ve also been leaving behind some distinctly dragon-ish traces.
Beaufort Scales, High Lord of the Cloverly Dragons, is hot on the trail – or would be, if he wasn’t having certain political problems at home. That leaves Alice and Miriam to track down the real culprits, rescue the hostages, and salvage Mortimer’s bauble reputation, all while misleading the police regarding the of existence of dragons, and hopefully without being blown up by unexpectedly aggressive Christmas decorations in the process. Luckily they have the full resources of the Toot Hansell Women’s Institute at their disposal. They’ll need it.
And then there’s the small question of who stole all the Christmas turkeys…
Dragons, the Women's Institute, and one very suspicious cat. What could possibly go wrong?
Yule Be Sorry is the perfect Christmas cozy mystery for anyone who likes their crime funny, dragonish, and full of cake and friendship.
Find Yule Be Sorry at Your Favorite Retailer

The 12 Cozy Mystery Carols of Christmas 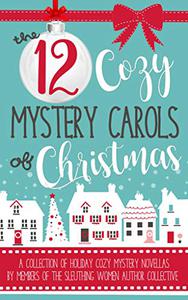 This is a collection of holiday cozy mystery novellas. Each of the twelve novellas is written by a different author.

The season is rife with tasks and obligations. Shopping, cleaning, cooking, and parties...you need some downtime. So, cue up your favorite holiday album and stoke up a blazing fire. Grab your preferred beverage and a bowl of freshly popped corn, and immerse yourself in murderous fun from a dozen goddesses of mystery, mayhem, and murder.