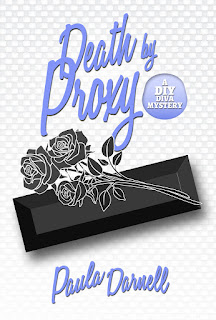 With preparations for her upcoming wedding to handsome Wes Wesson, a Center City police lieutenant, on track and her DIY Bridal Crafts class at Hawkeye Haven's community center wrapped up, DIY Diva Laurel McMillan looks forward to a calm pre-nuptial week to finalize her wedding plans.

There's only one problem: the week turns out to be anything but calm. Laurel and Wes narrowly escape being run down in the parking lot of their favorite restaurant. Laurel's bridal shower is interrupted by a mysterious stranger who sends Laurel's lovable chocolate Labrador retriever Bear into a frenzy, and when Laurel and Wes go to meet Lisa, their real estate agent, at a house she promised to show them, they discover Lisa's sister's body floating in the pool.

Strangely, Lisa seems more concerned with selling houses than she does with her sister's death. After Lisa's mother inadvertently reveals family secrets, Laurel wonders whether Lisa could have killed her own sister. Will the mayhem and murder stop before Laurel discovers the key to the killer's game plan?

Includes recipes and project instructions for a birdcage veil and a dog's bow tie.

This is the third book in the DIY Diva Mystery series.

Buy from your favorite retailer. 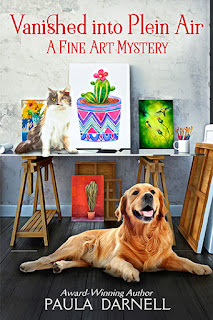 What's It All About?

Who wouldn't want to make a living from her favorite pastime?

Although sometimes self-doubt creeps in along the way, artist Amanda Trent has been striving to do just that, ever since her ex-husband dumped her for a younger woman and she moved to Lonesome Valley, Arizona, to start a new life. So when her friends from the Roadrunner Gallery urge her to join them and world-renown artist Ulysses Durand in a plein air paint-out, she hesitates, fearing that she might not be able to complete a painting in the four-hour time limit.

But everything goes smoothly at the public open-air event—until Ulysses's wife goes missing and he asks Amanda for her help. Has his past come back to haunt the famous artist? With a little help from her nemesis, cranky Lieutenant Belmont, the support of her friends, and the companionship of her furry feline Mona Lisa and her lovable golden retriever Laddie, Amanda tracks a killer who's determined to strike again unless Amanda can save the day. 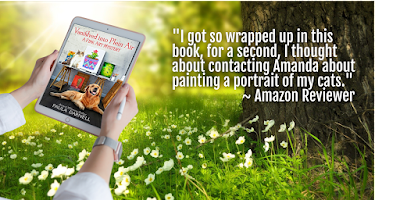 Read an Excerpt from Chapter One

“Look at the crowd, Emma! Brooks made such a big deal that he was inviting only a few people to the private pre-opening of his new gallery, but it seems like half the town is here.”

“Sure does,” my daughter agreed. “Do you think they'll serve champagne?”

“I'm sure there'll be plenty. Now that you're twenty-one, you're entitled,” I said. with a wan smile.

My daughter and I had celebrated our respective birthdays a couple of weeks earlier, just days apart. Unfortunately, I'd now hit the mid-century mark, and I wasn't too thrilled about it.

“Oh, sure. Just thinking about that zero in my age now. It makes me feel so old.”

“Honestly, Mom, you look way younger than fifty. You look like you're forty—really you do.”

A year ago, my daughter wouldn't have been able to say the same. I'd still been in shock after my husband unexpectedly divorced me and married his twenty-five-year-old assistant, who was only a few years older than Emma.

What a difference a year made. I'd moved to a new town in a new state, turned my part-time art hobby into a full-time business, and bought the house, with its own attached art studio, that I'd rented when I'd first moved to Lonesome Valley, Arizona, from Kansas City.

“Hey, beautiful! You didn't tell me you were coming to the opening.”

I turned to see Chip, a young artist who flirted with me every time he saw me, although he was only a few years older than Emma.

“Hi, Chip,” I said, ignoring the compliment. I'd learned that it was best not to take his flirtatious ways too seriously. “Did Susan come with you?”

“She's right over there.” He pointed to a boutique a few doors down from the gallery.

I spotted her checking out the shop's window display. When she looked our way, she waved and hurried over.

“Lonesome Valley Resort's mall is really something,” she said after we exchanged a hug. “I don't know why I've never shopped here before. I'm surprised Brooks didn't move his gallery sooner.”

“I guess he's turning over a whole new leaf. He has a year's worth of shows by other artists already scheduled, from what I understand, but none for himself.”

“Sounds like a smart move to me. His artwork's not very good, to put it kindly.”

“What a crush,” I said as we slowly made our way toward the door of the new Brooks Miller Gallery.

“Mom, they're having people show their invitations at the door to get in.”

“I have mine in my bag. Good thing I remembered to bring it,” I said, pulling the elegant, gold-trimmed card from my purse.

“Well, I didn't bring my invitation, but I can be your plus one, I suppose,” Chip said.

“Sure, that'll work. It looks like most of the crowd is here to listen to the string quartet,” Susan observed, pointing to a group of musicians who were setting up in front of the gallery.

Susan and I handed our invitations to the young woman who greeted us at the door, and we filed in. We'd been invited to a “private pre-opening showing of paintings by world-renown artist Ulysses Durand,” and, evidently “private” meant just that.

Although we'd left the crowd behind outside, we could hear the quartet tuning up before they began playing a sprightly number. Brooks, who managed the Lonesome Valley Resort, owned by his family trust, had undoubtedly arranged for the musicians.

Ulysses Durand's paintings reminded me of Ralph Anderson's, with their precise details and sweeping views of Western landscapes. Ralph, now in his mid-eighties, had been one of the founders of the Roadrunner Gallery, an artists' cooperative on Main Street I'd joined a few months after my arrival in town. That's where I'd met Susan, Chip, Ralph, and lots of other members artists, and the gallery had become my home away from home.

“How about some champagne, Auntie?” Chip offered.

“Don't call me Auntie,” Susan said automatically, for all the good it would do her to object, since Chip never tired of teasing her. “And, yes, I'd love some.”

Chip was about to head toward the bar set up in a corner of the gallery when Emma asked, “Aren't you going to offer to bring me champagne?”

“Sorry, Emma. Are you sure you're old enough to handle it?”

Just then, a distinguished-looking man, impeccably dressed in a suit and tie, entered the gallery, and Brooks, looking equally distinguished in his own bespoke attire, rushed over to greet him. When I heard Brooks call the man “senator,” I nudged Susan. “Isn't that Senator Hastings?” I asked her.

“It sure is,” she confirmed. “I guess we're in good company.”

We gathered in front of a large oil painting of the Grand Canyon, so that we'd be out of the way. While Susan and I examined the brushwork, Emma surveyed the guests.

“They're only the hottest new Hollywood power couple ever. Oh, I can't believe it!”

“Believe what, Emma?” Chip asked as he returned with four glasses of champagne neatly arranged on a silver tray.

When Emma told him, his eyes widened.

“I'm impressed,” he muttered as he stared at the movie stars. “Looks like Brooks pulled out all the stops.”

Chip held out the tray, and after we'd each taken a glass, he offered a toast to the Roadrunner.

“To the Roadrunner!” we said in unison as we clinked glasses.

“Another celebrity,” Chip said, motioning toward the door where Brooks was greeting a lanky man who towered over his petite wife. In her sparkling red, sequined cocktail dress, she was garnering as much attention as her husband.

“Is he a basketball player?” Susan asked Chip.

“I wonder how Brooks was able to entice the celebrities to attend,” Susan said, “but, I guess if you have enough money, anything's possible.”

“He probably comped them suites for the weekend here at the resort,” Chip guessed. “But where's the star of the show? We haven't seen Ulysses Durand yet.”

“Probably around the corner in the back room,” I surmised.

Like the Roadrunner, Brooks's new gallery had a free-standing wall in the center, which partially divided the space, providing more display areas for paintings.

Susan and I agreed, but Emma hung back.

“Later, Mom? I'm going to try to talk to Anne and Terry. Maybe I can take a selfie with them.”

Chip, Susan, and I rounded the corner into the back room of the gallery, where several people had gathered around the famous artist. There didn't appear to be an opening to join the group, so we bided our time by looking at the paintings until Ulysses Durand left his admirers and began making his way around the room, greeting guests as he went. We held our ground and as soon as he came to us, we quickly introduced ourselves and let him know how much we enjoyed his artwork.

“It's great to have some other artists here,” Ulysses said genially. He was a short man of about sixty with gray hair who wouldn't normally stand out in a crowd. “I know a couple of local artists. I hope they'll be here tonight.”

He looked past us and broke into a smile.

“Here's one of them now. Please excuse me.”

We turned to see our friend Ralph leaning heavily on a cane.

“His arthritis must really be bothering him,” Susan said. “I've never seen him use a cane before.”

We were surprised when Ulysses embraced the old man. Ralph didn't seem quite as enthusiastic in his greeting as Ulysses had been, but that wasn't unusual since Ralph tended to be reserved.

The two stood in front of the largest painting in the room, discussing it, until a new group of guests came into the back space, and Ulysses moved on to talk to them.

Ralph spotted us and motioned us to come over

“Sorry. I don't mean to be rude,” he apologized, “but my knee's killing me today.”

“Let me find you a chair,” Chip offered. “There must be one around here somewhere.”

“No, no,” Ralph protested. “I don't want to be a nuisance. I'm all right standing here. Funny thing is the knee wasn't even bothering me yesterday. Unfortunately, it would have to kick up a storm today.”

“Aren't you scheduled to work in the gallery tomorrow?” Susan asked. “I can fill in for you, if you like.”

“I just may take you up on that. Can I let you know in the morning?”

I was glad that Susan had volunteered because I couldn't. Tomorrow Emma would be returning to college in Southern California, and we were planning on leaving for Sky Harbor Airport in Phoenix at nine in the morning, the same time the gallery would be opening for the day.

“I take it you know Ulysses Durand,” Chip said to Ralph.

“Yes. I do. Thirty years ago, he was my star student.”