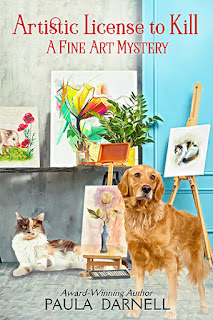 What's it all about?
Artist Amanda Trent, accompanied by her beloved golden retriever Laddie and her persnickety calico cat Mona Lisa, is determined to start a new life after her husband divorces her to marry a younger woman, but it isn't easy.

After a disastrous interview at the prestigious Roadrunner Gallery in Lonesome Valley, Arizona, far away from her previous home in Kansas City, Amanda's afraid that she'll fail at her new career. But her prospects begin to improve when she's accepted as the newest member of the cooperative gallery.

Then, on her very first day, she discovers Janice, the stern director, has been murdered right in the art gallery, and the Roadrunner's members, including Amanda herself, become suspects. Which gallery member murdered the unpopular director? Or was the killer an outsider with an ax to grind?

Read an Excerpt from Chapter One
I squirmed in the hard metal chair as the three committee members examined the paintings I'd brought for their review.
The cordial, collegial chat I'd imagined when I'd applied to join the Roadrunner, a cooperative art gallery, had never happened. Instead, the director, a tall woman with cropped salt-and-pepper hair, had greeted me with a frown as I'd set up my canvases on the easels she'd provided.
The other two committee members—Travis Baxter, a wiry young man with long blond hair, and Pamela Smith, a tiny bird-like woman with sharp features—hadn't been any friendlier than the director. After glancing at my artist's statement and resumé, they'd peppered me with pointed questions that seemed framed to put me on the defensive. If that was their strategy, they'd succeeded.
As the three of them examined my paintings in silence, I clasped my hands firmly together so they wouldn't notice that I was trembling. Finally, the long-haired man cleared his throat and looked at the two women. They all returned to their seats behind a long table and looked at me solemnly.
Janice Warren, the gallery director, informed me that they'd take my application for membership under advisement and that I'd be notified by mail as to whether or not I'd been approved to join the cooperative artists' group that ran the Roadrunner Gallery.
I managed to stammer a thank-you before I began gathering my canvases. I felt like running out of the gallery, but I restrained myself, knowing that I had to make two trips to my SUV to stow my paintings in the back.
The three committee members watched as I toted my canvases from the gallery's meeting room. Nobody offered to help me carry them. Nobody smiled at me.
As soon as I'd secured the last two paintings in my Toyota, I started the engine and peeled away from the curb. I couldn't wait to escape.
As I sped down Main Street, not bothering to glance in my rear view mirror, I heard the wail of a siren behind me. My tires screeched as I braked a little too hard.
A police car came alongside me, and the officer signaled me to pull over. Groaning, I slowly moved to the nearest parking space and stopped my SUV. It was still early in the morning, and the shops weren't open yet, so the street was nearly deserted.
While the police car parked in back of me, I reached into my purse and took out my Missouri driver's license; then I dug around inside the console next to me until I found my auto registration card. I put my window down and braced for a stern lecture.
“License and registration, please, ma'am.”
I handed them to him. At least he'd said “please.” Although I didn't much like being called “ma'am,” since I would be reaching the big mid-century mark on my next birthday, I guessed it wouldn't be the last time it would happen.
“You must be in a big hurry to get back to Kansas City,” he commented, staring at my license.
“Well, no. I'm sorry. I was upset, and I just wanted to put some distance between myself and the gallery.”
“Oh?”
“I, uh, I applied to become a member, and I just had my interview there. It didn't go very well.”
“You must live here now if you're joining the co-op.”
I could have kicked myself for saying too much. Now, he'd probably cite me for not having an Arizona driver's license and not registering my SUV in my new state.
“Yes, I do. I moved here a few months ago.” Again, too much information. I couldn't seem to stop babbling.
“If that's a permanent move, you should get your Arizona license and registration right away.”
Great, I thought. Could this day get any worse?
Preorder from Your Favorite Retailer
Special Introductory Price - Just 99 cents!
Amazon       Apple Books       Barnes & Noble       Kobo